Development threat to be removed from council plan 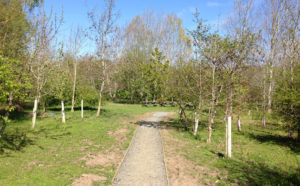 Assurances have been received from local councillors that Big Shunter’s Wud will be removed from the proposed Local Development Plan.

Following objections from the Darnick Village Development Trust (DVDT) and a number of residents the reference to the community woodland is to be removed before the plan goes before the council.

However, the threat of development of the parkland at Darnlee is still likely to remain in the approved plan unless the volume of objections puts it in front of the independent Reporter.

Along with many villagers, the DVDT has lodged a formal objection to the development of the land at Darnlee, currently used as grazing land, and to a reference to ‘land west of Darnlee’, which had been identified for future development.

Angie Stormont, Chair of DVDT, said: “There was real concern that the phrase ‘land west of Darnlee’ was the community woodland and we felt very strongly this should be removed. We copied our letter of objection to the local councillors and were both delighted and relieved when they responded very quickly with their support and assurances that the community woodland would be removed from the plan.

“Unfortunately, they believe the development of Darnlee will remain in the plan, but the DVDT is still hopeful that if there have been enough objections this may be reconsidered. Any unresolved objections will be considered by an independent Reporter, so there’s still a chance it can be taken out of the plan.”

In an email to the DVDT Cllr Tom Miers stated: “I contacted officers and they have agreed to remove the reference to longer term development to the west of the village. They recognise it’s out of date given the new houses built and the development of the community woodland.”

Cllr David Parker in a separate email added: “The community woodland (Big Shunter’s Wud) is a well-recognised outstanding environmental asset for Darnick and the neighbouring communities and the village should be applauded for its creation. It is critical this site is protected from development and all of your observations about its importance are well understood by Tom and I.”

However, both councillors felt that the plan for housing at Darnlee will not be removed by the council, but they would push for strong planning measures to be in place to ensure any new development fitted with the conservation area if the independent Reporter does not remove it.

Cllr Parker said: “Tom and I have made representation to the Planning Team on this site and Tom has specifically suggested putting in place measures to ensure that there is high quality design of the site and that much care is taken around any potential development.

“The Planning Team have agreed to this, so when the Plan next comes to Council this summer, I expect the conditions around the development of this site will be significant and will impose high quality design criteria and strong environmental protection.

“I appreciate the changes outlined above may not be enough to resolve your objection so what is likely to happen is that the site will go forward to the reporter as a site with unresolved objections against it. So, although I do not think the Council will remove the site at this stage, the independent reporter who ultimately examines the Council’s proposals may choose to do so.”

Error: Error validating access token: The session has been invalidated because the user changed their password or Facebook has changed the session for security reasons.
Type: OAuthException
Code: 190
Subcode: 460
Please refer to our Error Message Reference.