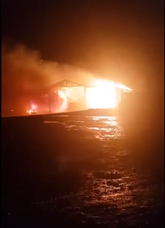 An appeal for witnesses has been made after vandals torched a Darnick farm building in Broomilees Road, causing over a quarter of a million pounds worth of damage and narrowly missing a family home.

Farmer Michael Kelly is now asking local people for help in catching the suspects, who ran through the grounds of Borders General Hospital after setting the blaze, sometime between 3.45am and 4am on Saturday December 29th.

In an email to villagers, Michael said he was hoping there may have been a keeper out lamping or someone at the hospital that night who may have seen something.

Michael added that apart from the quarter of a million pound plus of damage, and the time and inconvenience the fire will cause, if the wind had been blowing in another direction he and his family would now be homeless.

Anyone with any information can call Police Scotland on 101.

Error: Error validating access token: The session has been invalidated because the user changed their password or Facebook has changed the session for security reasons.
Type: OAuthException
Code: 190
Subcode: 460
Please refer to our Error Message Reference.