Reference to Darnick can be traced back to the 12th century, the name being derived from the Anglo Saxon words, ‘derne’ and ‘wic’, meaning hidden dwellings.  Variations over the ages arrived at the present Darnick. 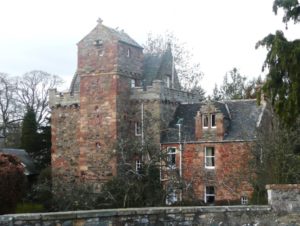 Prominent in the village is Darnick Tower.  This ancient Border peel tower, built originally in 1425 still remains as a residential dwelling.  It was rebuilt in 1569 after partial destruction in one of the many invasions experienced in the Border country.

Nowadays the invasions are much friendlier and occur all year round, with walkers passign through and visits from tourists staying at the Waverley Castle Hotel, which was built between 1869 and 1871 and is one of the earliest mass concrete buildings in Scotland.

One of the last clan battles in Scotland took place nearby in 1526 in the aptly named Skirmish Field, near the site of the Waverley Castle Hotel.

The house of Darnlee at the top end of the village is the home of the Smith family, whose forebears, in 1891, built and donated to the community the lovely village hall known as the Smith Memorial Hall.  The hall is very well used by local groups and organisations – see What’s On for the latest list of activities and events.

Remains still exist of the Edinburgh – Carlisle railway, better known as the ‘Waverley Route’ which was closed in 1969.  In September 2015 there was a partial re-opening of this route as far as Tweedbank station, which is only a 15 minute walk from the village.

1988 saw the new Borders General Hospital come to Darnick when it was built across the other side of the Melrose by-pass.

A short walk round Darnick

A short walk round Darnick (A settlement chartered in 1143 by King David 1 to the monks of Melrose) to the Darnick Village Community Garden.

From the Waverley Castle Hotel (point A) cross the busy Waverley Road and enter Abbotsford Road running South. On your right is Darnlee (1816), built by a locally famous builder, John Smith of Darnick. He also built Sir Walter Scott’s home Abbotsford, and many others. Turn right into Broomilees Rd, noting the mounting stone at the corner.

At point B explore Wee Shunter’s Wud on the left and Shunter’s Wud on the right, returning to Point B. Turn sharp left down a straight, narrow lane, which marks the route of the former 1849 Border Union Railway. Two dwellings, Endolyne and The Sidings, are reminders of the railway. A train crash occurred near here in 1921. No blood was spilt, but many barrels of Newcastle beer!

Looking up at the skyline, Eildon Hill North on the left was formerly a Bronze Age settlement (and the terracing is still visible), and 2,000 years ago became a Roman signal station. And, of course, a mile or so downstream on the Tweed was the Roman fort of Trimontium, or 3 hills. All Roman roads, they said, led to Trimontium.

Turn left into Smith’s Road, named after our famous builder. In Darnick in 1866 there flourished a joiner, a shoemaker, 3 farmers, 2 blacksmiths, 2 grocers, a coal merchant and an innkeeper. No longer!

At the end of Smith’s Road, turn right, then a few yards further on turn left into Tower Road. At about 20 yards on the left you can get a view through a fine stone archway of Darnick Tower (1569), still privately owned and inhabited.

A little further down Tower Rd is the Darnick Village Community Garden, a haven for plants, flowers, wildlife and people!  Take a seat, rest, and read the board. Go down Fisher’s Lane and return to the hotel (point C), perhaps extending your walk to the Tweed via pathways either side. 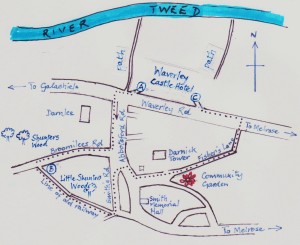